Bill Cruz is a favorite at Wiggle Room.  He calls himself a Gay Bully and a flaming Broncos fan. His infectious comedy will have you screaming in your seats. Check Bill out on Facebook and Follow him on Twitter. 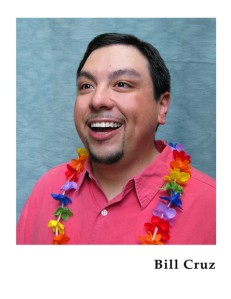 WR: Your bio says you have “huggable likability”. What makes you huggable?

WR: You missed the Grammy’s.  Can you still call yourself a gay man?
BC: Please!? The Grammy’s barely count anymore, they might as well be the Kids Choice Awards. Plus, if its worth seeing… its on youtube.
WR: What topics are off limits for you on stage?
BC: For me… not much… probably anything I have no idea what it is… like the Kardashians. I couldn’t pick one out of a line up.
WR: What’s the cutest name you’ve ever called a lover?
BC: Your Honor!
WR: What’s the worst thing someone has called you? Was it accurate?

BC: “Not a Real Mexican” – not accurate. 1. “Real” is a subjective anD abstract concept. 2. I love menudo (the food). 3. Machismo was sooo last century.