Join us in June for 4 very special editions of Wiggle Room! 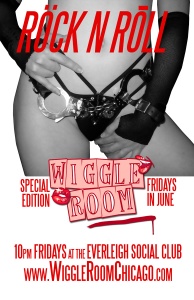 The first 3 weeks of June will be Wiggle Room ROCKS!The girls will be rockin’ your socks and their clothes off at the Everleigh Social Club on June 6, 13 and 20th. Don’t miss these rockin’ babes! CLICK HERE FOR TICKETS 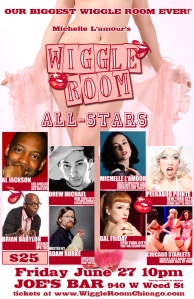 We’ve put together a lineup of stand up comedy and burlesque that is so big, the Everleigh Social Club could not contain it. So we’re moving FOR ONE NIGHT ONLY to Joe’s Bar (940 W Weed Street in Chicago).