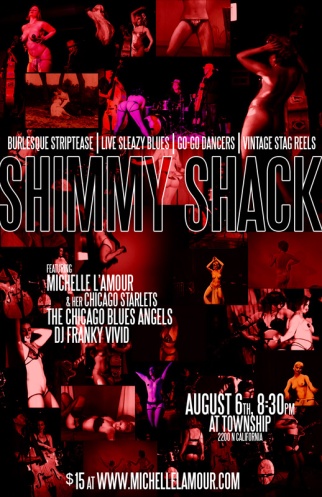 On August 6, we’re back with another installment of Shimmy Shack! Get down and dirty with some rockin’ Chicago blues! Join us for this great new event, The Shimmy Shack at Township for a night of burlesque striptease, wiggling GoGo dancers,  live music from the Chicago Blues Angels, vintage stag films and sleazy beats by DJ Franky Vivid.

Michelle L’amour and the Chicago Starlets bring you this night of debauchery for ONE NIGHT ONLY.

Get your tix here!

Marty Derosa, the Comedy Sammy Sosa!  This week we chat for a minute with a multi-talented comic who headlines Wiggle Room this week.  Marty Derosa is a monster of Chicago stand up and also hosts his own popular podcast.  Check it out at WRESTLING WITH DEPRESSION and Follow him on Twitter.

WR: You’ve been called the King of Chicago Crowd Work.  What edicts would you like put forth in that station?

MD: As King, I feel it’s only right that I get a crown. I’d take it off to perform because I’m not a maniac. Also, I’d like to have a throne w/ handles and be carried to the stage not unlike “Macho King” Randy Savage.

WR: What do wrestling and stand up comedy have in common?

MD:  Wrestling & comedy are very similar in the fact that we are out there without a net. We are doing what we sort of planned on but if the crowd isn’t into it or they are super into something we can go that direction. A play or a storyteller can’t do that. We also rely on the crowd to tell us what our next move is. We also sell t-shirts after shows for gas money.

WR: What topics are off limits for you on stage?

I think you can joke about anything you want if it’s funny. The problem with that is you have to try it to see if it’s funny. If it isn’t, as in my case, I just move along. I don’t blame the crowd. What I think is funny & what someone else does is very different. I respect that. I think they are nerds, but I respect that.

WR: What’s the cutest name you’ve ever called a lover?

The cutest name was Sparkle Princess. She was but like most sparkle princesses she had to return to her kingdom (aka her parents house in another state) and get on medication.

WR: What’s the worst thing someone has called you? Was it accurate?

Wiggle Room is back and better than ever with riotously funny comics from the cream of the Chicago (and beyond) crop performing alongside the city’s sexiest burlesque dancers.

Michelle L’amour is bringing back the acclaimed show for a fourth season on September 13.  The show will run at 10pm Fridays at the Everleigh Social Club in Chicago.

Don’t miss host Adam Burke and Burlesque Hall of Famers Michelle L’amour and the Chicago Starlets as they embark on another hilarious and arousing journey of stand-up comedy and burlesque.

MAKE YOUR RESERVATIONS NOW FOR OPENING NIGHT AND BEYOND BY CLICKING HERE.

Friday, July 26th Michelle L’amour and her world famous Chicago Starlets present a brand new show where every act has NEVER BEEN SEEN BEFORE! The girls have been toiling for months to put together world debuts including sexy solo acts and hot group numbers.

This Summer is heating up with a production unlike any other as world champion burlesque performers from right here in Chicago present tasty morsels of deliciousness they’ve been cooking all Spring. The line-up will include* Michelle L’amour, Delia Aces, Stella LaRocque, Honey Halfpint, Rhonda Vous, Dottie LaVie, Ivy Fabulous, Lady Ginger, Dorian Ames, Lily Bloom and Sophia Hart with group performances by the Chicago Starlets. And the whole thing is hosted by comic Marty DeRosa! You do not want to miss this show!

Tickets are as low as $20! CLICK HERE FOR INFO

Don’t miss the fabulous “Show Us Your Newbies” show, this Thursday, June 27th at Joe’s Bar (940 W. Weed in Chicago).  It’s burlesque voyeurism at its best.  For info CLICK HERE.

Thursday, June 27th is one of the most fun shows of the year. If you’re a true voyeur, this is the show for you!

Join the graduating class of Studio L’amour as they take the stage to TAKE IT OFF for the first time. We could not be prouder to present Josie Daye, Charlie Scarlet, Vera Goode, Vayda Rhynstone, Lillian Angel, Daphne De Lune, Millie Toulouse, Phoebe Moon, Roma Belle and Poppy Petite!

Tickets are ONLY $15 ($10 for Everleigh Social Club members)! CLICK HERE FOR INFO

Join us this Friday, June 28 at 7pm for the 2nd Annual “HOT DISHES”. Since Naked Girls Reading is OUR fantasy, we feel it’s our responsibility to also fulfill many of YOUR fantasies. Last year, when Chicago debuted “HOT DISHES” – a Naked Girls Reading Cooking event – we got such a great response from all of you who have dreamed and fantasized about lovely ladies cooking delicious treats without any clothes on (the girls, not the treats).That’s why we’re doing it again! Yay!Join us on June 28th in Chicago as the girls read from great culinary anecdotes. They’ll also be cooking some fun bites for you to enjoy – all included in the ticket price. Don’t miss the words of Anthony Bourdain as read by a naked Greta Layne, or Michelle L’amour doing her best Julia Childs impersonating, all while downing sweet and savory dishes cooked up by the girls themselves. For a sneak peek – WATCH THIS VIDEO (NSFW)Friday, June 28 – 7pmEverleigh Social Club – 939 W Randolph, ChicagoGET YOUR TICKETS HERE.

Hey everyone!  Wiggle Room has been extended for THREE WEEKS (through May 17)!  Grab your tickets now and see the show everyone is talking about:

Chicago’s TOP comics (best o’ the best!) and Stand-Out Striptease performances by the Chicago Starlets.  THIS WEEK (Apr 26) Michelle L’amour, Greta Layne and Honey Halfpint. Be sure to grab a ticket to Naked Girls Reading two and make it a double header evening.

And GET YOUR TICKETS NOW for our newest venture, Old Time Strip Show at Martyr’s on April 20th.

NOW ON FRIDAYS! OPENS NEXT WEEK!

Chicago’s most acclaimed burlesque producers have pulled together another incredible ongoing lineup of amazing performers hosted by Adam Burke and featuring the World Famous Chicago Starlets (winner “Best Burlesque Group in the World 2010 at the Burlesque Hall of Fame).

Opening Friday, March 22nd, Adam Burke hosts a cast of Chicago’s cream of the cream stand-up comics who will take the stage at the Everleigh Social Club along with a bevy of beautiful burlesque dancers to entice, delight and otherwise entertain in this intimate setting. Guests will find themselves couched in the luxurious sexuality of this incredible, unique nightspot surrounded by the best talent the City of Broad Shoulders has to offer.

It’s Video Week and I’m releasing a special video to the public each day this week.  Today is a short film directed by Franky Vivid and starring Michelle L’amour and Greta Layne.  I think it’s a sexy little film and I know you’ll love it.